The reaction of random strangers quickly illustrated the problems and benefits of the new Chevy SS and the Dodge Charger SRT8. While driving the SRT on the freeway, I was surrounded by a group of sport bikers. Their leader tried to get my attention, and when I looked over he offered a long and sincere thumbs up at the car. Then when parking the Chevy SS, a man approached and asked what it was, if it was fast, and assumed it was a SS version of some other Chevy car, like the Malibu. For two cars trying to offer muscle car attitude in a modern four-door, there was already a clear winner. But attitude isn’t everything.

My first car long term car was a Chevy Caprice. It was a hand-me-down from my Caprice obsessed father and I drove some variation of this V8 RWD cop car for nearly a decade. Since then, my taste in cars has developed toward ever smaller, lighter, and more involved driving experiences. If I didn’t have to deal with snow I think I’d drive a BAC mono year round… never mind that I can’t afford one.

So climbing into these two modern variations of the old Caprice recipe is both a time-machine and a touchstone for how my interests have changed. The Dodge Charger SRT is even larger than those old Caprices and has more than twice the horsepower. The Chevy SS is the modern day ancestor of my own Chevy but is more capable in every way. These cars carry with them the difficult task of trying to be modern, usable, well-rounded automobiles as well as tire-shredding muscle car hoon-mobiles. This is a niche segment of the automotive world, but one I’m glad still exists.

In the last two decades, RWD has been relegated to trucks and expensive luxury sedans. Enthusiasts have sought out rear-drive options wherever they are offered, but this has often meant waiting for the German selections to drop down to affordable used prices. One of the main reasons I liked the <a title="Dodge Charger" href="http://everydaydriver.com/reviews/dodge-charger/" target="_blank">V6 SXT Charger</a> we drove a few years ago, was its unique offering of a large RWD family car with some personality and a price of around thirty grand. These V8 variations hover around the fifty-thousand mark, making them a tougher proposition, but they are still much more affordable than similar competitors.

Since its beginnings, the reference point for modern large performance sedans has been the M5. When measured alongside the BMW, the Dodge and Chevy really show their talent and value. Both will hit 60 within a tenth of the big BMW and offer at least as much room, (or in the case of the Charger… much more!). Yet these American alternatives cost half the price of the M5.

Of course, comparing an American sedan to any autobahn bred German option can be a scary proposition. While Detroit has always made military grade powerplants, the refinement and agility of our sedans have fallen short. Yet, like most everything else, the car-shopping world has become a close-knit global experience and being fast from a stoplight is less relevant than ever.

Commuting across Los Angeles toward our shoot location, I was struck by the fact both these cars handle the monotony well. There’s plenty of power to use holes in the traffic, comfortable seats, blue-tooth, navigation, and a litany of sensors falling just short of taking over completely. The SRT looks menacing, ducking through traffic like some four-wheeled shark, devouring pavement and encouraging others to move. Meanwhile the SS blends into the sea of varied sheet metal, and if not for “Red Hot” paint it would likely vanish, unnoticed, in the blur of transportation.

The SS interior feels upscale, with nice alcantara accents and good materials nearly everywhere. While the Chevy outshines the Dodge, the Charger interior is now a few years old and reflects the vast improvement in all of Dodge’s interior designs. The SRT isn’t bad, but feels truck-interior bulky and offers up some disappointing textured plastics to go with its $55,000 price tag.

Power is immense, with both cars packing rumbling V8s well over 6 Liters in capacity and past 400 in horsepower and torque. The SRT8 wins with 470hp and equivalent torque, beating the SS by 55 in each category. The Dodge hauls around 400 pounds more bulk, but feels more powerful all the time. Burnouts are so easy it becomes almost boring… almost. However, while the Chevy pulls with purpose above 4,000 RPM, at partial throttle or low revs the engine feels reserved and unwilling to show off.

In nearly every category these cars reveal incongruent traits. The SRT has the most power, but the SS sounds more aggressive. The SRT is heavier, but has the best brakes. The SS is lighter and smaller, but feels slower and less powerful. The SRT is the best looking, but the SS offers the nicest interior. And strangest of all, the Dodge offers hydraulic steering but gives less feedback than Chevy’s electric unit.

After vacillating between these cars and struggling to find a favorite, the answer became clear when the roads tightened. Tossing both these cars down a canyon road reveals the better driver’s car, and took this comparison from a near toss up to my preference for the Chevy SS.

The Charger is simply enormous, and shouldn’t handle nearly as well as it does. While it never shrinks or finds an ability to dance, you can hustle this car in tight bends, and even surprise yourself with the grip. But it doesn’t like it.

In contrast, the Chevy SS continues General Motor’s parade of great chassis and superb balance being showcased throughout much of their current line-up. While some call the SS a “four-door-Corvette”, it falls short of brilliant. This isn’t a sports car, but it handles far better than nearly any four-door sedan being sold right now. If GM had given the SS their superb Magnetic Ride control I suspect this car would be the best handling full-size four-door on the planet. Without those special magnetic shocks, the SS still lands among the best handling sedans on the market at any price. Yes, it can be beat, but its betters are either GM products with Magnetic Ride Control, or German luxury costing more than twice as much. The SS is a lot of driver’s car or the money.

The problem is no one will ever know the great car you’re driving. Maybe that doesn’t matter to you, and for some people that’s an asset. But I want a great car to have a bit of a showoff side. The SRT shouts its intentions from every angle and with every feature. The SS hides its capabilities in a suit so well tailored it seems downright mundane.

The Chevy SS is the best full-size performance sedan bargain on the market. There, I said it. Yet, I don’t feel giddy to share this discovery. The car looks like a Malibu in a body kit and rarely showed much character or stirred a visceral response during our time with the car. Paul said it made speed boring. I never felt bored on a fast back road corner or floor-boarded blast, but I can see why he feels that way. And that’s a shame.

I hope both the Charger SRT and Chevy SS sell well. In fact, I hope they can’t make them fast enough because these cars are a dying breed. Considering both of these cars are made outside the US (and the SS is borrowed from the Australian Holden Commodore chassis) it’s a miracle we have them at all. If either one were offered in a manual transmission they’d be more rare than a rainbow colored unicorn. Big naturally aspirated V8 sedans are going away. Both these cars deserve to find owners who will drive them with a laugh and a hooner’s attitude.

I just wish the SRT handled better, and the SS could find its wild side. 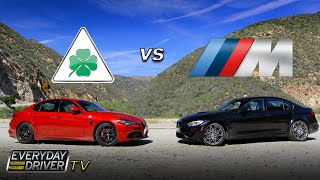 Anticipation. Disappointment. An Alfa Romeo and a BMW

For Better And Worse

Plugging In: My EV Shopping Experience

The five first steps of a new project

Is less ever really more?

The Land Cruiser is the Supra of the off-road world